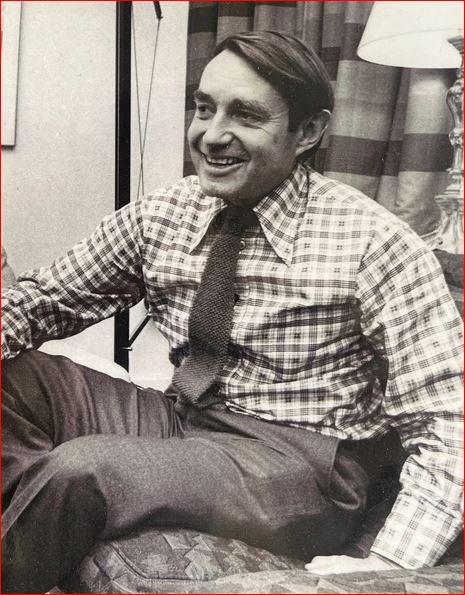 Ronald Storrs McCall died peacefully in Lachute, Quebec, surrounded by his family, at the age of 91. He is lovingly remembered by his wife, Ann (née Griffin), his children, Mengo, Kai (Sepideh), Sophie (David) and his grandchildren Kalliopé, Anoushak, Timoléon, Maya, Skye and Scarlet.

Storrs was a deeply curious person with a lifelong love of learning. He brought big ideas to all he did as a philosopher, teacher, farmer and fun-loving family man. He loved sports and was a true all-rounder in golf, hockey, rowing, tennis, squash and skiing. Together with Ann, he hosted many memorable dinner parties. He loved head-scratching riddles, valued conversation and challenged his guests intellectually in friendly and generous ways. He was committed to many causes, from promoting education in Uganda and Southern Sudan in the 1960s, resisting land expropriation at Mirabel in the 1970s, promoting a bilingual and multicultural Quebec in the 1980s, proposing a Great Books program at McGill University in the 1990s and supporting the Nature Conservancy of Canada in the 2000s. His warm, positive and hopeful vision of life was shaped by values of fairness and generosity.

Always a top student, Storrs became a Rhodes scholar in 1953 and earned his D.Phil in 1964 at Oxford University. With interests in philosophy and math, physics and literature, art and politics, he was a true Renaissance man, bridging academic disciplines. His life's work as a philosopher culminated in his landmark book, A Model of the Universe (Oxford 1994). Beginning with a straightforward explanation of time flow using a branched tree model, the book applies advanced theories of quantum mechanics and math to shed light on enduring philosophical questions.

Storrs had a legendary style of lecturing, captivating generations of students with his accessible delivery, his humour and his brightly patterned, wide ties. He believed everyone benefited from studying the great thinkers in the Western canon, and his Introduction to Philosophy class was taken by thousands of undergraduates who went on to pursue careers in many different fields. From 1965 to 1971, he and others worked to establish the study of philosophy at Makerere University in Kampala, Uganda. He also taught at the University of Pittsburgh before returning with his young family to McGill. He had a long-standing presence at McGill, with over fifty years of teaching, beginning in his early twenties. He was a daily attendee at the Faculty Club where he joined fellow academics in lively discussions over lunch. He gave generously to McGill, establishing the Professor Storrs McCall Fellowship for Graduate Students in Philosophy in 2019.

North River Farm was Storrs's true home, and a gathering place for his immediate and extended family. His interests at the farm included agriculture as well as a deep commitment to nature and conservation. Storrs's father first established the farm, and it grew further with the dedicated contributions of Bill Brass, his son Ian Brass, and Clifton Berry. Their expertise in agriculture produced top quality Jersey and Aberdeen Angus herds, maple syrup, and crops. A decade ago, wishing to preserve the natural beauty and biodiversity of the farm in perpetuity, Storrs signed a document of protection with the Nature Conservancy of Canada.

All of his accomplishments would not have had meaning without Storrs's beloved wife and companion, Ann. They met in 1962 in the philosophy classroom at McGill. Waiting until after her graduation, they married and set off on a life of adventure; enjoying a happy and harmonious marriage of fifty-seven years. Their compatibility extended in everything they did. They enjoyed combining work and pleasure, whether it was singing together in a choir or taking sabbaticals in Australia. In later years, Storrs was lovingly cared for by Ann, who always encouraged him to stay active and connected to his family. For Storrs, his enduring love for his family always came first and was the source of his greatest happiness.