The portion of Ruth Hall memorial that you are trying to access requires an extension in order to become active again. Would you like to contribute to the memorial?s extension? 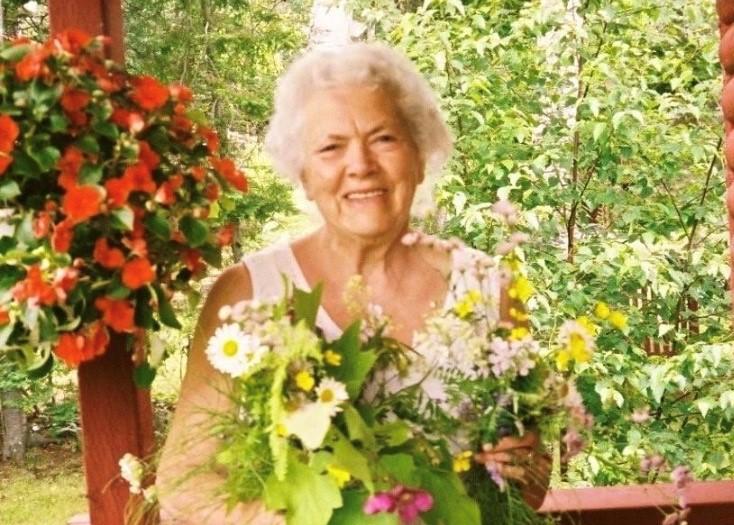 Remembering the life of Ruth Hall

It is with bittersweet emotions that we announce the passing of Ruth Margaret (Blennerhassett) Hall in her 100th year, lovingly referred to by so many as Mz. Hall. She is now with her blessed Lord and Saviour and reunited with her beloved husband Albert, who passed away in 1998 after more than 50 years of marriage. Her eldest son David predeceased her in May 2020. Ruth is survived by her children Rosemary, David’s wife Jean (Wills), Karen Lantela, Stephen, Tim (Beatriz Rollins), and John (Heather Ross); her grandchildren, Christopher, Stephanie, Lauryn, Heather, Emilie, Julian, Cristian, Rowland, Isabelle, Caroline, and Taina; and her great-grandchildren, Merrin, Gabriel, Seth, Isaac, Matthew, Olympia, Lucas, Lilah, and Danny. She was predeceased by her brother Rowland Nelson (Buster), and her sister Wynetta Mitton.

Ruth grew up in Montreal where she spent most of her life until she moved to Toronto in 2001. She graduated as a Registered Nurse in the early 1940’s and practiced well into her sixties with great skill and undying care and tenderness for her patients. She started her large family with Albert in 1947 and showered enduring love and attention on them, their offspring, and the extended family for the next 75 years.

Ruth was passionately devoted to the Lord Jesus, and most of what she strived to accomplish was meant to be in his service and to his glory. She cherished and thrived in the Christian communities that she belonged to including Newman Place in Montreal, and Greenwood in Toronto, and the Verdun Sunday school where she met Albert, who before long (strategically?) befriended her brother. She had many long-time friends and cousins but always made sure that she reached out to new people who were joining the circle, or were struggling, and provided deep friendship and pastoral care. She was the definition of a gracious woman, always patient, kind, and encouraging to people. She also sought to integrate with Christian groups beyond her own, seeking to exemplify Christian unity.

Over the years, Ruth spent many weeks and months at her favourite place on the shores of Lake Macdonald in the Laurentians (Rest-a-While) which her parents had purchased before she was 10 years old. She loved to host her children and their children there as well as share in family events with her sister and brother. For as long as she could, even after Albert’s passing, she moved up there for the warm months and never failed to faithfully tend to the gorgeous flower boxes hanging in front of the house.

She passed away quietly in her sleep in the early morning of July 26, 2022 in her bed at her nursing home where she was loved by all with her beautiful smile and gracious demeanour. She and the family have been truly grateful for the wonderful care provided by the staff of True Davidson and by her personal caregivers.

There will be a service in Ruth’s memory at 11am on August 3 in the Outremont Room at the Mount Royal Funeral Complex, 1297 Chemin de la Forêt in Montreal, followed by a burial onsite. A live streaming link will be available on Ruth’s page on the funeral home website closer to the date. Visitation will take place at the same location from 5pm to 8pm on Tuesday August 2.

Donations in Ruth’s memory can be made to Greenwood Gospel Chapel in Toronto for the children’s ministry, for which Ruth was a prayer warrior and supporter.

She would want us all to know that although she is leaving this world, she is present with the Lord, asleep in his everlasting arms.

Ruth and Albert were like family to us when we were living in St Lazar QC then later in Hudson. She was always so gracious and kind to the children in their early years. We often traveled to Ottawa together to visit there. She would come to watch the children if Nancy and I needed a bit of time together alone or if Nancy needed to go to the clinic for treatment. She would come to visit even after she was living in Toronto and only visiting family in Montreal. A wonderful and godly model for the children in a formative time of life, and a sweet comfort to Nancy as she endured the specter of cancer when the children were so young. We were able to visit one time to her condo in Toronto and we were lovingly received - all seven of us - despite the weakness of age. She was a wonderful and faithful child of God and a beautiful person to be blessed by in our lives. Thank you Lord for her faithful, consistent and joyful life of service to You.

Have such great memories of all the meals shared with your family as a child and always so kindly served by Mrs. Hall! Also, too many times to mention, of the fun at the cottage with the whole family. Will be thinking of you all. We would liked to have come to the service but we hope to join by zoom as we both have covid this week.

My deepest condolences to the Hall family. Grandma Hall was a sweet and kind soul. She raised loving children who, in turn, do the same. May you find comfort in the memories you all shared together at this difficult time.

Our deepest condolences to you John and your entire family from the staff on 5 East. "Ruthie" as we all called her was our pride and joy plus she was our "Nursie" as well. May you find comfort that she is now free from all pain and that she had the most beautiful death, passing in her sleep. May God grant her eternal rest now.

rUTH, A MOST SPECIAL WOMRN, CARING FOR OTHERS ALWAYS. EASY TO LOVE