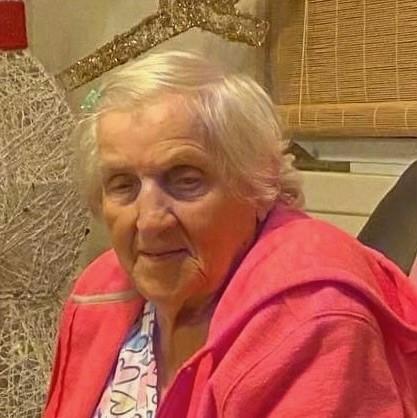 Passed away at the age of 96 years young after a brief illness at Anna Laberge Hospital, at 10:15pm on December 30, 2022, surrounded by loved ones.

Velma was well known for her honesty, which was brutal at times, her compassion, and her unending generosity. Family and friends meant everything to Velma, some of whom called her Velma, Nanny or Mrs. Lee. Her unwavering spirit to remain as healthy as possible resulted in three discharges from hospital to independent living, despite being told she would never return home. As a young woman, Velma served in the WRENs (Women’s Royal Canadian Naval Service) and was active in the Royal Canadian Legion, recently #108 in Chateauguay, until her passing and always cherished the friendships she developed with colleagues. She had 13 children, 4 of whom passed at birth, 9 of which were the focus of her life. She worked at Lorne School, in Pointe St. Charles, for several years and formed many long-lasting relationships with colleagues and students.

Visitation and funeral services at the Royal Canadian Legion, Branch 108 at 39 Gilmore St. Chateauguay, QC. January 14th, 2023. Visitation will be from 1:00-2:00pm and funeral services from 2:00-3:00pm. Coffee/Tea and snacks will be provided from 3:00-4:00pm A private family dinner will be served at the legion from 5:00-7:00pm. Please take the time to sign the Memorial book on this page. Tell us how you know Velma/Nanny/Mrs. Lee and leave your memories and stories to memorialize her.

In lieu of flowers, donations to the Royal Canadian Legion, Branch #108, will be appreciated.