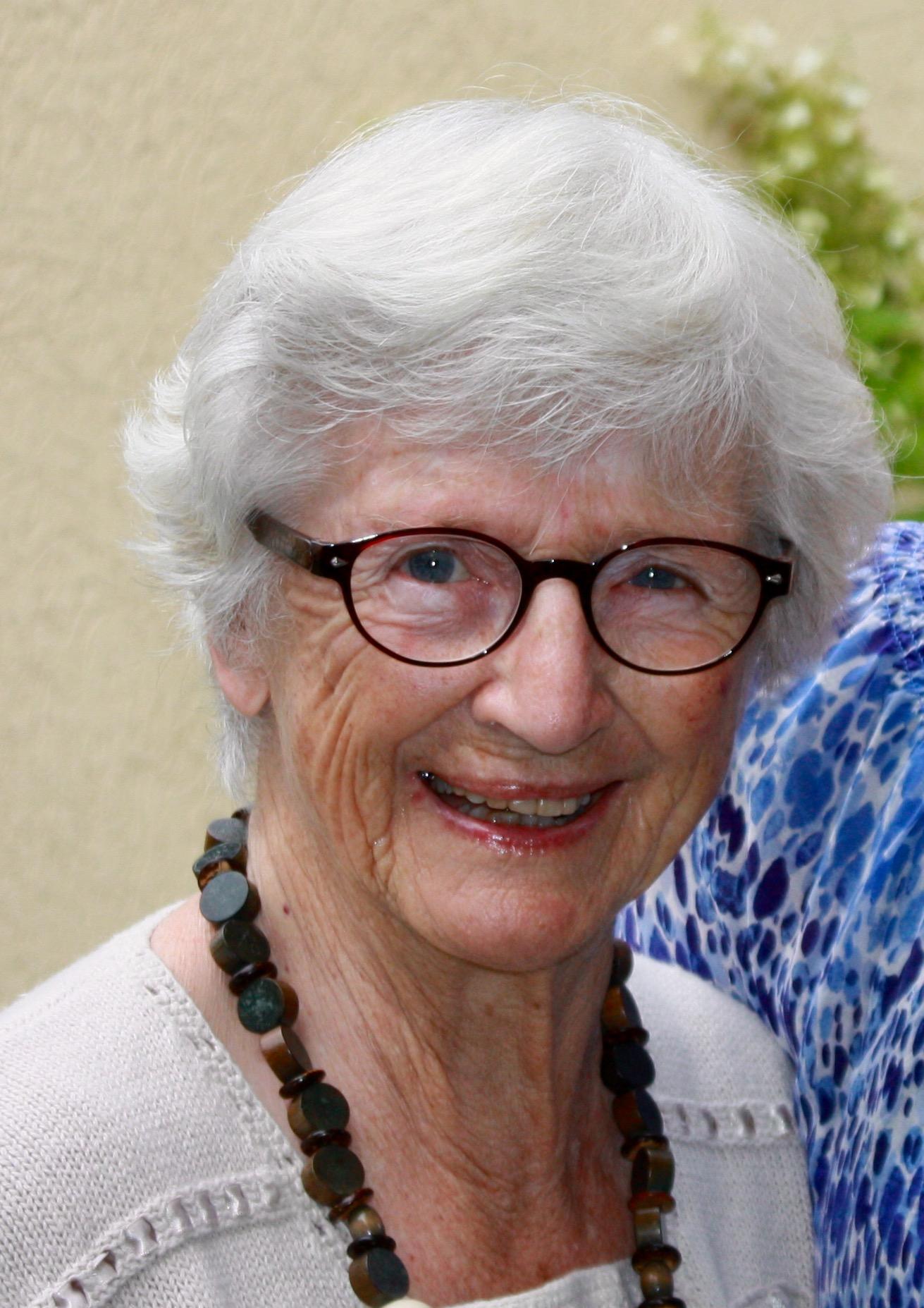 Audrey and her twin sister Rita were born in Wimbledon, UK, on Feb 15, 1930. They grew up in the Harrow district of London and graduated at age 18 from public school. Audrey won a scholarship to art school, yet was unable to attend because of the war.

Audrey’s first job was as “a computer” in the aeronautics department of Imperial College, performing the manual calculations that today are done electronically. It was at Imperial College that she met Gordon. They celebrated Gordon’s 27th birthday on their first date, were engaged in August and married on the 1st of November, 1952.

Audrey and Gordon emigrated to Montreal via New York in March of 1953, traveling by ship and train. They arrived the morning of Friday, March 13th, with $200 in the bank, no cash in pocket and no jobs. Audrey took the tram to Canadair (now Bombardier) that afternoon where she was able to obtain a clerical job starting the following Monday. Fortunately, Gordon was also able to obtain a job at Canadair as an engineer starting the week after that. The personnel office at Canadair found them a two-week billet and then an apartment. Their income was $50 (Audrey) and $108 (Gordon) per week and the apartment was $80 per month. One could say that Audrey supported Gordon during their first years while his salary was saved for the eventual purchase of their first home.

The couple were in their apartment for two years before they moved into a brand new house in a French suburb in May of 1955. The road, water and sewage came four months later. Their first son Roy was born a year later. This house remained Audrey’s home until her decease and Gordon still lives there.

In 1958, Gordon built the cottage in the Laurentian hills north of Montreal while Audrey pregnant with their second child and Roy (age 2) lived in a tent for the first seven rainy weekends. Audrey built the cottage kitchen table which still remains in use. Their second son, Tony, was born in the Fall and a third son, Ian, was born in 1963. Audrey’s adventurous life was well underway.

Audrey stopped working in 1956 when Roy was born and resumed working in 1980. She received her Bachelor’s degree in Library Science from Concordia University and her teaching certificate from McGill University, studying from 1975 to 1988. Initially working in entry-level positions, these degrees allowed Audrey to obtain a position as a teacher-librarian in the elementary school system. Eventually, the whole family would attend McGill at some time or another.

During the period of 1955 to 1988, Audrey’s life was extremely busy as a housewife, mother, travel companion, student and teacher-librarian. Using a new sewing machine, Audrey extended Gordon’s tent so it could sleep two people and they traveled to the Rockies for two weeks. With Roy’s arrival, a new tent was purchased, tall enough to stand in and just enough room to sleep all three. This tent became another home for the family’s frequent weekend and summer trips to the east coast of Canada and the USA. With no previous experience, Audrey rapidly learned to cook outdoors in the rain and sun, keeping babies and young boys active and safe. As the years progressed, Audrey learned to look at the outdoors as a way of life. Their biggest camping trip was along the west and southern coast of Newfoundland traveling by tramp steamer, bus and hitchhiking. Audrey proved to be ever resourceful and remained so during all of her travels.

When not traveling or working, Audrey filled her time at the cottage both in summer and winter, downhill skiing in winter and eventually learning to ski cross-country. Audrey became well known at Mont Christie Ski hill and the surrounding area where the cottage is located. Making many friends with the other locals and with lots of children around, Audrey became known for her parties and British style pub lunches. Her main dislike was continuously packing to travel between cottage and the city home. She worked hard with her children’s studies but the winter always took its toll on their grades. During one period of her life, Audrey was the local Girl Guides commissioner even though her children were all boys.

A bleak spot for Audrey was with regards to tennis. An avid fan and player after having being born in Wimbledon, she continued to play in Canada on the local courts. It all finished when a serious fall occurred at a neighbour’s home and she broke her wrist. Her tennis playing was over.

Audrey’s hobbies were numerous. Cooking was special and the family lived well. These skills allowed her to make three-tier weddings cakes for her sons when the time arose. Audrey had always made clothes for herself and dressed well, although the need diminished in her later years. Other products of her handiwork were ski clothes for the family, curtains for the house, upholstering the furniture, Christmas and birthday decorations, mosquito shelters and numerous costumes for Halloween and the famous annual Mont Christie carnivals. Audrey loved creating costumes which won her accolades at the ski hill and the Viking Ski Club. In the summer, gardening and cycling were added to Audrey’s repertoire.

Audrey showed up the neighbourhood in Laval with her British flower gardens with something always in bloom. As she aged, she had chairs placed in strategic locations for ten minute rests while working the flower beds. Earlier on, Audrey had a bike with a trailer for shopping and a baby seat for the youngest of the given moment (not needed in later years). Years later she would participate in several Tour de l’isle cycling events in Montreal.

An avid book reader which kept her occupied, Audrey also played Sudoku, read the news and listened to music. At various times, she and Gordon had season tickets to the Montreal Symphony Orchestra, the Montreal Opera and they visited Tanglewood in the USA. They had season tickets for numerous years to the Centaur Theatre in Montreal and occasionally went to the Stratford and Shaw Festivals in Ontario.

Over the years, Audrey returned either on her own or with children and husband in tow to visit her family in the UK. From her late 60s to age 85, they camped in tents at Presqu’isle each year with various sons and member of their respective families joining them for sun, rain and wind.

Upon retirement, Audrey’s daughter-in-law who worked for Air Canada as a flight attendant phoned and asked where she and Gordon would like to go using an employee’s family discount. The furthest destination flown by Air Canada at that time was Mumbai and within three weeks, they were off. There were just the two of them with a guide at each tour site – Taj Mahal, Delhi, Jaipur, etc. They were hooked and went on yearly trips, either alone or with small group adventure tours. Round the world (South Africa, Australia, New Zealand, Fiji, USA), South America, the high arctic twice with grandchildren in tow, Congo, Gabon, Nigeria. Many of the latter destinations were to visit their middle son Tony who worked in west and southern Africa with his family. Other destinations included the mid-East (Turkey, Israel, Jordan, Yemen), France, Spain and the Caribbean. Then a change of pace when Audrey organized a loop through western Canada: train from Calgary through the Rockies to Vancouver, BC and Alaskan Ferries (no cruise ship) up the coast to Skagway, train and bus to Whitehorse and then a bus back to Calgary via Kamloops. In 2012, they went on a traditional (sort of) cruise circumnavigating Newfoundland aboard a small ship exploring the geology, ecology and history of the island. A more traditional cruise followed, from St Petersburg to Moscow. Audrey enjoyed the trip but stated the view of churches in passing became repetitive. Their final trip was to Calgary to visit Tony and his family in 2019.

How was all of this at age 90? The garden had the chairs, the bike and swimming were finished at 88, cooking tended towards the traditional, sewing became for repairs and decorations, skiing became snowshoeing, and walking for mere one hour jaunts. A physical life had given way to watching the joggers and dog walkers through the window. Her last snowshoeing trip was less than three weeks before she passed and her last great feast (quail) was for Christmas. Socializing became extremely difficult with the aging of friends and the emergence of COVID-19. Yet she remained alert enough to conquer some of the vagaries of an iPhone.

Audrey was in her twilight and while unable to maintain the same degree of physical activity, she remained alert, read, cooked, maintained two homes and hosted the occasional visits from her sons Roy (Lyne), Tony and Ian (Jane) who were her biggest pride. She loved her grandchildren (Kristopher, Kasia (Karl), Genevieve, Caitlin, Matthew, Gavin and Jake) and her great-grandson Olson. Audrey's life was in the final, slow glide through which she remained content and comfortable knowing that she had lived a life well spent.

A celebration of life is planned for late summer.

In lieu of flowers, donations to Sun Youth https://sunyouthorg.com/ would be appreciated.

Get Directions
Date and time to be determined.
Info: SARS-COV-2 permitting, we hope to hold a celebration of life in late summer at the cottage
Make a Donation
Help Extend the Memorial
Order a Keepsake Book